Community Bank of the Bay is delighted to be the local banking partner to Oakland Art Murmur,
a small nonprofit with an outsized drive to bring visibility and recognition to the city’s visual arts
and artists.

Since its founding in 2006, the organization has helped grow Oakland’s arts community from a
cluster of artist workspaces into an economic and cultural tour de force of about 50 venues
around the city currently showcasing and fostering visual art.

It was Art Murmur’s efforts—through initiating monthly “art walks” and other public events at
galleries, artist workspaces, and small shops and eateries—that helped drive not just a vibrant
arts scene but a broader renaissance in restaurants, nightlife, and culture in the port city. In
2019, Oakland’s arrival as a cultural capital was recognized by National Geographic, which
named the city the “East Bay Star” in its annual list of best travel destinations.

“Art makes the city exciting,” said Jean Marie Durant, president of Art Murmur’s board of
directors. “Oakland is known as the ‘arts incubator’ of the Bay Area.”

The effort has required broad community support and Art Murmur has tapped retailers,
developers, and city officials to help sponsor its initiatives. Community Bank of the Bay, Art
Murmur’s bank of choice since the beginning, played a role in developing those sponsorships.

Art Murmur’s relationship manager at CBB, Helen Wyman, “has been an amazing connector,”
Durant said, putting Art Murmur in touch with people in different industries who wanted to help
the arts. “[CBB] wants to see our little nonprofit be successful and that they do what they can to
support us.”

It’s important to Durant and the arts community to maintain Oakland’s rich diversity and inclusive
reputation—and, despite rapid growth, a small-town feel. Durant said she prefers a bank that
embodies those principles. “I know when I call [CBB], I’ll get a human. It’s not about going
through a million prompts. There’s a value to that especially in these days when things are so
big and impersonal.”

“What I value with CBB is that when I go in, I know the people that are there and I know they
live in my community,” Durant said. “They want to see the city thrive.”

Durant said the visual arts will remain a vibrant part of Oakland so long as the community
supports it. “It’s important to come together to be an arts city and value the creative work that
artists do.”

As a bank, we know that coming together builds a strong community and a strong economy. We
work with, and for, our community to foster equitable development and jobs, so that everyone,
including artists, can thrive. We’re honored to be a part of Art Murmur’s efforts on behalf of the
arts and the city of Oakland. When our community needs us, we’re ready to help. 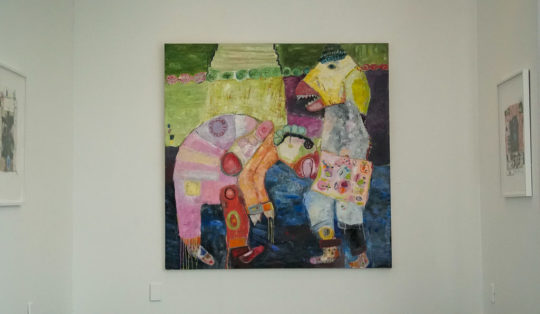 You will be leaving the www.bankcbb.com website. Community Bank of the Bay is not responsible for the accuracy of the information on the destination site. Click OK to continue.